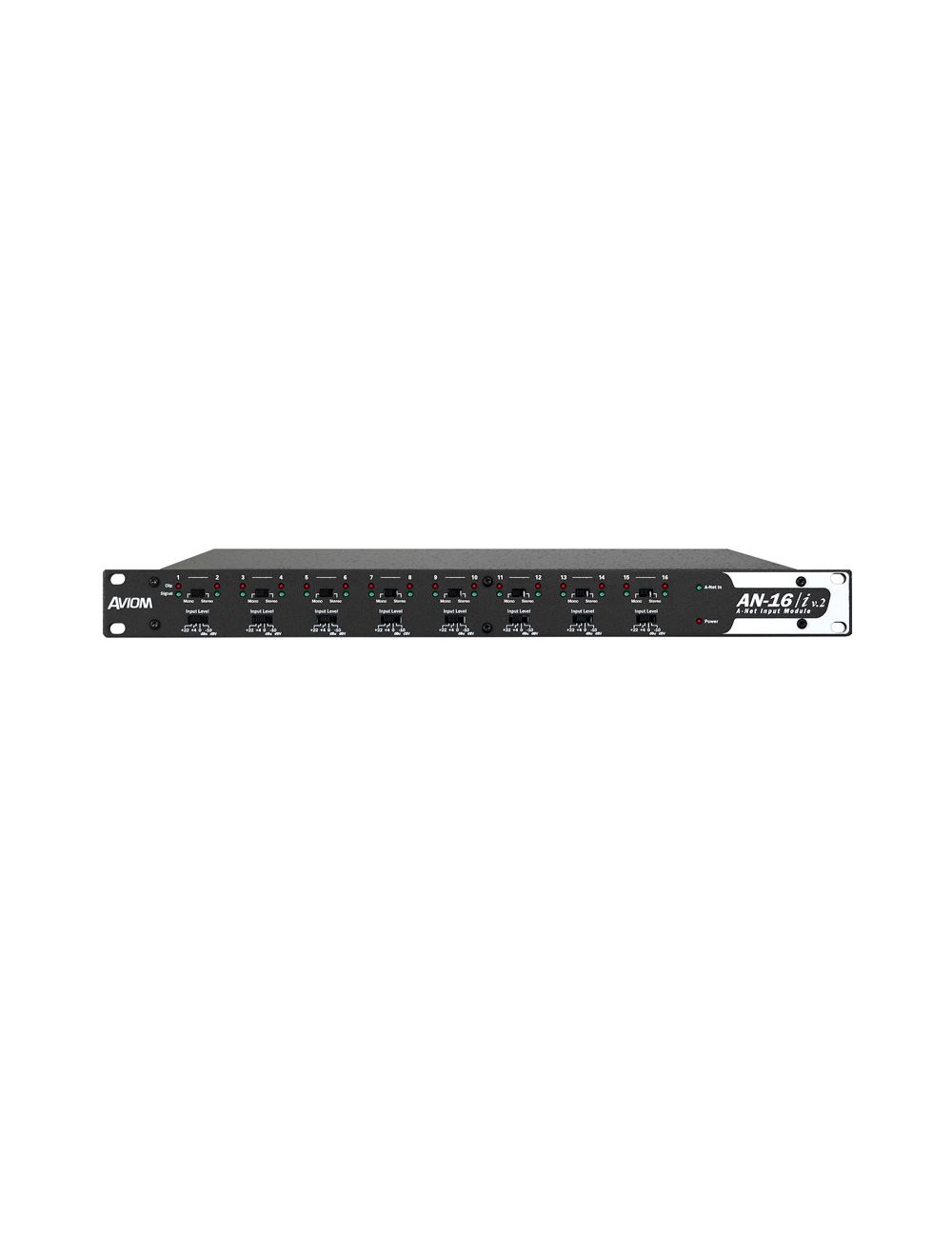 The Aviom AN-16/i v.2 Input Module is used to connect up to 16 balanced line-level inputs from a console’s direct outputs, insert points, aux sends, and/or submixes to a personal mixing system or digital snake.

The Aviom AN-16/i v.2 Input Module is used to connect up to 16 balanced line-level inputs from a console’s direct outputs, insert points, aux sends, and/or submixes to a personal mixing system or digital snake. When used alone, one AN-16/i v.2 can generate a single 16-channel A-Net signal.
The A-Net In on the AN-16/i v.2 allows multiple Pro16 input devices (including console cards, AN-16/i-M, AV-M8, and the original AN-16/i) to be connected together to generate the higher channel count Pro16e™ version of A-Net used by the A360 Personal Mixer and A320 Personal Mixer.

Analog line-level audio connected to the TRS inputs on the AN-16/i v.2 is converted to digital and transmitted via the Pro16e version of A-Net® over Cat-5e cable to Personal Mixers or Pro16 output devices. Higher channel count A-Net streams can be generated by daisy chaining additional Pro16 Series input devices via the A-Net In jack on the AN-16/i v.2. The four-position slot range switch allows each AN-16/i v.2 in a system to be assigned to one of the four slot ranges supported by the Pro16e protocol, increasing the total audio sources available to the personal mixing system to 64.

Building Blocks for Personal Mixing Systems
The AN-16/i v.2 is typically placed near the front-of-house or monitor console to simplify patching when it is used as the head-end for a Pro16 personal mixing system. Audio from the console—any combination of channel inserts, direct outs, submixes, auxes, or groups—is connected to the TRS input channels on the AN-16/i v.2. A dedicated audio thru jack is available for each input channel, allowing the AN-16/i v.2 to be seamlessly inserted into an existing audio signal path.
When used with A360 and A320 Personal Mixers, the Pro16e protocol allows stereo inputs sources to be seamlessly integrated into a personal mixing system. Each odd/even pair of inputs on the AN-16/i v.2 is automatically assigned to a single channel button on the A360 when a stereo source is connected.

Digital Snakes and Audio Networks
Used in conjunction with the AN-16/o v.4 Output Module, the AN-16/i v.2 can also be used in a digital snake as an input path for main return signals from front-of-house to signal processors and amps at the stage. The SB4 System Bridge can be used to combine up to four Pro16 or Pro16e A-Net streams onto a single Cat-5e cable in a variety of bidirectional configurations.
The flexibility and simplicity of the Pro16 Series allows complex audio distribution systems and snakes to be created quickly and cost-effectively.

Note that the original A-16 Personal Mixer is not compatible with the AN-16/i v.2.